The Rise of the DevZombies

When it comes to software development, the cat’s out of the bag – failing to implement key security activities throughout has earned insecure software top prize with hackers. Malicious attacks resulting from the exploitation of vulnerabilities are on the rise and are no longer limited to large enterprises. SMBs are popular targets of cyberattacks and ransomware. Further, vulnerabilities are no longer just found in security-sensitive software and applications. They are found in things like cars, point-of-sale (POS) systems, and medical devices.

Developers are often blamed for security vulnerabilities, but that may be an unfair assessment. More often than not, security barely has a pulse in an organization’s Software Development Lifecycle (SDLC), let alone the plethora of developer-specific tasks that need to be conducted. This lack of organizational commitment to security is producing a steady stream of DevZombies, developers doing exactly what they are “told” to do and unknowingly aiding and abetting hackers.

Findings from a Carlton University study supports dozens of other similar (and more current) research. I like the Carlton study for a few reasons. First, it demonstrates the often-forgotten variable in securing software – what developers “think” they are responsible for. Secondly, they break down the developer role into 6 discrete functions (as shown in Table 1 below) – Design, Implementation, Developer Testing, Code Analysis, Code Review, Post-Development Testing.

Carlton talked to 15 development teams in the industry to understand steps taken to ensure the security of their applications (labeled T1, T2, T3…..T15). Participants self-selected into two distinct cohorts. The first is called Security Adopters, which considers security in at least 4 of the 6 development functions. The second group, which barely considers security, is labeled Security Inattentive. This group followed practices (or did not follow any at all) that led to poor security approaches. Given the recent adoption of DevOps and CI/CD trends, one could create even more sub-categories for developers, which would make the situation even bleaker. 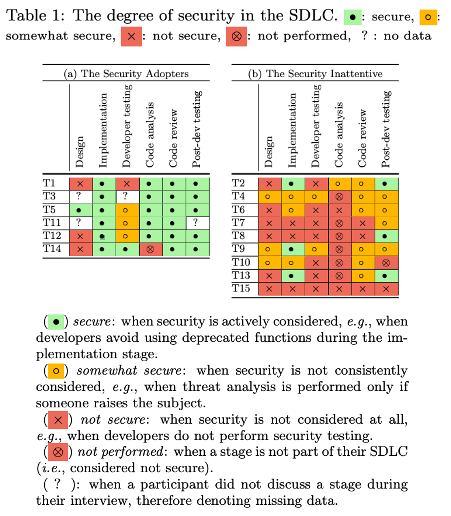 Security is a complex problem that extends beyond developers. Sometimes a developer lacks security knowledge, but it is also true that developers’ supervisors dismiss security. In the areas where a task/function (i.e., reliability) was a clear expectation, they prioritized it.

In reality, security practices are markedly different from best practices identified in literature, standards, and other resources. Developers inherently want to build resilient software, but they need the know-how and to be put on a path to success by management. This analysis suggests that the problem often begins within a company’s hierarchies where they don’t formally document and declare what specific aspects of security are the developer’s responsibility.