Everything required to test a novel OAuth 2.0 implementation.

You’ve been assigned to your next gig and the primary focus is to evaluate a custom OAuth 2.0 implementation. You’ve heard of OAuth as a third-party authorization delegation service, but need a set of test cases and some context.

I’ll explain everything you need to know about OAuth from a security standpoint and provide a clear list of test cases so you can report high severity issues on your next engagement.

OAuth is an attempt to migrate authorization to a third party service. It allows a resource provider (RP), to request access to a user’s resources from an identity provider (IDP) subject to the user’s approval. The RP is usually the website in scope for the engagement and the IDP is usually an external service like GitHub, Bitbucket, or Facebook.

There are multiple different grant types that change the OAuth flow. Initially, this page will document some of the edge cases which should be covered during Authorization Code Grant flows. 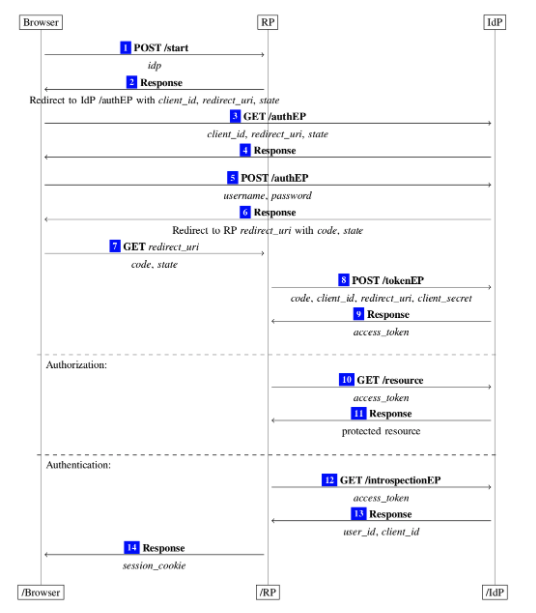 In this diagram, the RP is the website you will be testing, and the IDP is the identity provider who owns the user’s resources. Let’s walk through each step of the diagram with a bit of hypothetical commentary so the unaltered flow is understood.

This gets a bit dense. Understanding these steps in detail is crucial if you want to find issues within the OAuth implementation. If possible I would recommend opening the image and these steps side-by-side so you can reference back and forth as needed.

The steps below correspond to the steps in the diagram above:

Summary of Key Items and Permissions

An access token is a multiple-use string issued by the IDP which can be directly used to access the user’s resources stored on the IDP.

The client_id is unique to each RP and allows the RP to identify itself to the IDP.

The Client Secret is unique to each RP and allows the RP to exchange valid code and state combinations for Access Tokens at the IDP.

The Redirect URI is the location where the IDP will send the Browser after completing the auth dance. When the Browser is directed here, it will contain the Authorization Code and the State.

Now you understand how the OAuth 2.0 Code Grant flow should work under ideal circumstances. Let’s enumerate a number of test cases, ranging from least to most complicated, which can derail the process and provide an attacker with advantages.

This is an easy test item, and often one of the most deadly attacks for OAuth. Recall in Step 2. that the Redirect URI should be registered to a single value or in some cases to a pattern match. The key danger here is when the pattern match is insufficiently specified and allows the Redirect URI to be anywhere within the top-level domain.

If any location in the domain allows an attacker to include material (an image link, href, etc.) they can often steal the Code and the State from the Referer header. Even worse, because the Redirect URI was not the expected OAuth endpoint, it’s very likely that the code won’t have been consumed for an Access Token yet.

Before marking this issue as high severity, make sure to verify that the site doesn’t trim the Referer header or otherwise strip the URL parameters. Otherwise, the Code / State will be difficult to recover and this is just an open redirect. If an XSS can be found anywhere in the site, the code / state can be stolen through JavaScript which checks the URL parameters.

This is a prerequisite to the previous attack; ensure that after the IDP’s redirect to the RP, the Referer header is stripped of URL parameters or even removed if possible. This will prevent the attack scenario detailed above.

If the RP makes a GET request which contains the Access Token in the URL parameters, then the sensitive OAuth variables may be stored in browser history. This is easy to test for and can be a quick problem report.

The threat is of medium severity if the access token is stored, but if only the code or state is stored, it’s low severity as the attacker would require some sort of local access to the victim’s machine. Even then, it’s likely that the code has already been redeemed for an access token, so the only real attacks would revolve around stealing a reused state variable.

If at any point in testing you see a raw Access Token, that’s probably a medium severity finding. Being able to convert stolen codes to access tokens allows an attacker to bypass whatever limited functionality is available through the service and instead directly hit the IDP with whatever access was approved in the scope.

The severity of this issue is amplified by the fact that scopes cannot (usually) be restricted at the IDP level. It’s solely up to the user to verify that the scope is correct. So an attacker can compose a CSRF attack to change the scope level, steal a code / state through the above attacks, and convert it to an access token in their own browser. This would give them full control over the victim’s IDP resources.

If at any point in testing you see the Client Secret, that’s a medium to high severity finding. An attacker with the Client secret is able to convert stolen codes to access tokens, allowing them to bypass whatever limited functionality is available through the service and instead directly hit the IDP with the access approved in the OAuth scope.

If the RP declines to provide a state variable, which is technically optional as per the spec, they will be placing users at risk of CSRF attacks. Attackers can compose CSRF attacks with modified Redirect URIs and an attacker’s Code to authenticate the victim using attacker resources.

If the victim does not realize that the authentication code has been swapped, they may place sensitive data inside attacker-controlled resources. The reason this attack works is because the state parameter in step 2 is unique to a session. If there is no state provided at step 2 of the OAuth flow there is nothing to verify the session token against.

The State variable should be treated like a CSRF token. If the value used for State is predictable or otherwise brute force-ible, then it’s possible that an attacker could make multiple CSRF attacks in an automated fashion and brute force an authenticate a user with attacker resources.

If an attacker only has access to a victim’s State, they can compose a CSRF attack and use an attacker code in order to authenticate the victim using attacker OAuth resources. This is usually a medium severity issue but use your best judgment as the severity is tightly linked to the ease of leaking a state variable.

Sometimes an RP looks like they’re doing everything correctly, passing the state with sufficient entropy, keeping it unique per OAuth session, but behind the scenes, they just throw away the state token.

Alternatively, sometimes an attacker can omit the state variable and the request is treated as correct. This test is to ensure that all of the state is validated, and there are no bypasses that can be performed by simply ignoring the state.

Check to see if an RP will let a user redeem the same authorization code multiple times. Each code should only be good for a single OAuth session, reusing a code that has already been redeemed should result in an error.

This is definitely worth checking on all major web frameworks. Often web frameworks like Redux, React, etc. will have an internal state which is accessible through the console or through web browser plugins.

Developers will occasionally assume that this information is secret and will store the OAuth Access Token in the framework state. This can be stolen by an attacker and used to convert a victim’s authorization code and state into a usable access token which is leaked through these JavaScript objects. Test steps here will vary per framework and implementation.

This attack rarely works, but may be worth doing with more obscure IDPs. The initial request from an RP to an IDP in Step 2. has an optional parameter response_type. This attack attempts to convert the authorization code grant to an implicit grant, which skips the stage involving an authorization Code and immediately returns an Access Token.

Fun fact: Facebook by default allows for the Code workflow as well as the Implicit (called Token on Facebook) grant. Just something to keep in mind.

Also a pretty obscure attack, but could be worth trying with potentially insecure IDPs. If during the IDP’s redirect to the Redirect URI, they utilize a 307 code instead of a 302 code, and the IDP redirects the user immediately after they enter their credentials, it is possible for an attacker running a malicious RP to steal the user’s credentials.

The 307 status code will have the user’s Browser send a POST request to the RP containing all of the form information, including the user’s credentials!

OAuth is a complex protocol with an unintuitive specification. As an attacker, this translates to common mis-implementations within this central authorization protocol. Use this knowledge to fix as many broken implementations as you can and help developers launch secure software.

If this guide was helpful to you, or if you have comments about this article, please feel free to reach out. I want to hear what you think! If you want to read more of my content, view the archive on my personal site, subscribe to my newsletter, or support me on Ko-Fi (not affiliated with Security Innovation).

If you want to read about real-world exploitation of different OAuth bugs here are a few from the expert in OAuth hacking:

How to Test for Command Injection v2