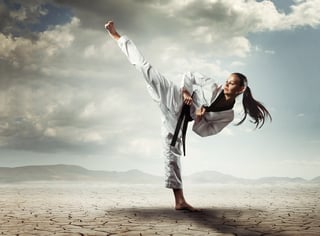 In the cyber world, we have an odd propensity to define everything as new and/or a breakthrough.  While having spent the last 20 years of my career in this space, my mechanical engineering degree rears its ugly head and causes me heartburn when this happens. In the non-cyber engineering world, we continually improve the methods (i.e. processes) and elements (technology/components) and speak more in terms of evolution versus revolution.

As a result, the cybersecurity space tends to generate more buzzwords than most. Remember NAC? DLP?  They all sound great “on paper” but when put to the test in the real world, either the blemishes become apparent or we realize we’ve really been doing this all along in some way (does “cloud” ring a bell? Rackspace has been around for decades). But then the next buzzword comes along and we spin around that.

This led me to come up with this blog series where I’ll shed some light on a buzzword each month, providing some background on the buzzword and then give you my 2 cents on its likelihood to “Sink or Swim?” All done in efforts to learn, discuss, and unearth (and to have a little fun).

A self-defending application (remember Oracle’s similar campaign a few years back?), what a great sounding thing! An application that can identify and protect itself against incoming threats — who wouldn’t sign up for that? Gartner did its part to fuel the hype, too, calling RASP “transformational” at their 2015 IT Security & Risk Management Summit. RASP had been on many radar screens for a year or two prior (Gartner talks privately a lot before they start talking publicly.) A few RASP startups appeared. HP, Checkmarx, and Veracode all started talking about RASP products they had (or had “in the lab”)… and then reality hit. RASP is very difficult to get right. On a call earlier this year, an investor with >$50m into an application security technology vendor called it “technologically infeasible.”

Personally, I spec’d out a RASP solution in 2007 (called it SharkTank, 2 years before the TV show of the same name first aired) that enabled self-defending applications. I am a nerd and tech junkie at heart; unfortunately, we couldn’t get SharkTank much past slideware because it was technically very difficult — nearly impossible in 2009 in fact.

The promise of RASP

As with all buzzwords, there is upside, promise, and potential.  From an application security and RASP perspective:

The reality of RASP

Also with all buzzwords, there is downside, disillusionment, and disappointment:

The future of RASP

If I were to tackle the RASP challenge today (as opposed to my grandiose slideware solution of 2007), I would start by attacking one problem/threat/attack type at a time — such as the example I used above, SQL injection. Pick my favorite list: OWASP Top 10? Why not. Then move on to XSS once I’ve mastered SQL injection. Start with the top of the list (most common/serious threats) and move down the list methodically.

I want to see a working, comprehensive RASP solution. I would BUY a working, comprehensive RASP solution. But the path we’re on now is not a path to success as I see it. I see another buzzword being beat to death in the chase of yet another promise that can’t be delivered upon.  RASP =  Random Application Semi-Protection or Real-Time Application Semi-Protection.

The Promise & The Peril of HTML5